In 2012 I was lucky enough to get to spend two days shooting on a U.S Aircraft carrier. It was a pretty awesome experience. And although filming on one is a very rare occurrence I figured it was worth sharing what I learnt from the trip. . .

To reach the carrier you are generally transported on a Grumman C-2 Greyhound which lands hard on the deck. All of your kit is stashed at the back – you can’t hand carry anything so make sure that all of your equipment is in hard boxes like Pelican cases. Even your camera needs to be in a case, stowed at the back of the aircraft.

– Wrap your camera in black foil to help protect from radar interference. There is some debate as to whether this actually makes a difference but I did it and I figure it can’t do any harm. Be sure to tuck the foil in well under your camera jacket because if it blows off while on deck you would be in serious trouble with the crew.

– When filming on deck start off by getting a few basic wide shots of take off and landing, you might only get to film five take-offs so don’t waste the first two realising that the aircraft are moving too fast to follow on a tight shot. Keep it simple until you get your confidence up.

– If you have a choice try and get a combination of shots from both the front and back of the deck as well as a top shot from the ‘crows nest’. (I missed the crows nest shots as I was with a reporter and had to shoot a piece to camera). It can be quite difficult to get enough of a variety of shots from one spot.

– The noise of take off and landing is incredible, be prepared for it and really think about how to mic up any interviews or pieces to camera. I used an ECM 77 hard wired lapel mic and just about got away with  it. I asked the reporter to let the aircraft speed past him, he watched it go, paused a moment while the noise dipped and then he spoke. Another Cameraman told me he hid a Sennheiser 416 inside a helmet (cranial) and got the reporter to hold it by his chest so that the mic was close to his mouth without being in shot – wish I’d thought of that!

– BGAN’s do work, but don’t always count on it. We were lucky and had no major problems – though we didn’t have to feed pictures at the same time that aircraft were landing or taking off – the radar interference could be a big issue for your signal.

Oh and you’d best hope that this doesn’t happen. . . 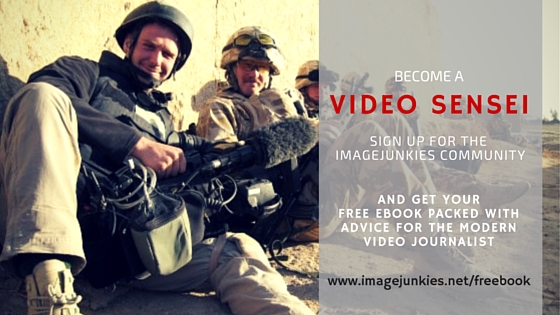 One thought on “Tips for shooting on an aircraft carrier”